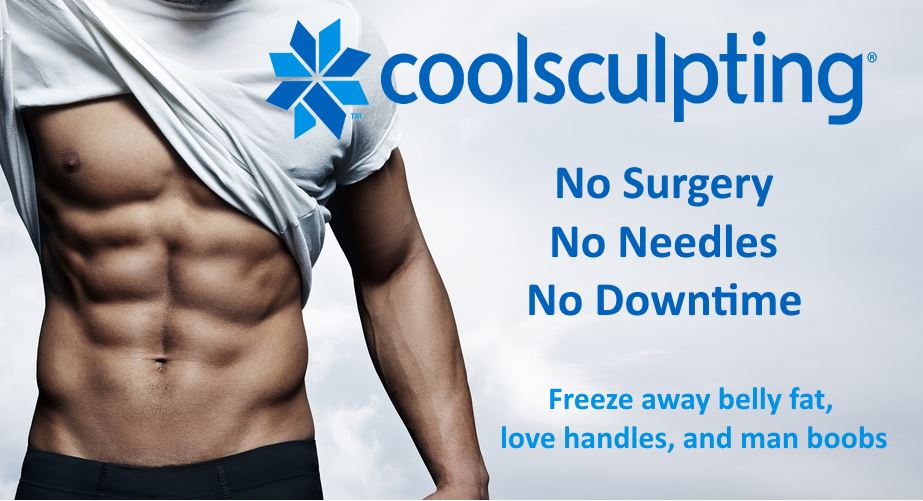 COOLSCULPTING FOR MEN IS ALL THE RAGE THESE DAYS AND FOR GOOD REASON. THIS NON-SURGICAL, NON-INVASIVE METHOD OF REMOVING STUBBORN BODY FAT CAN HELP MEN FEEL CONFIDENT AND COMFORTABLE IN THEIR BODY.

Unlike liposuction, tummy tucks or other procedures offered by plastic surgeons, CoolSculpting is a quick and easy, relatively pain-free outpatient experience. It can change a mans looks and  life.

Although all forms of fat-reduction treatment tend to be more popular with women, more and more men are turning to CoolSculpting to change their bodies for the better. Women are not the only people who are self-conscious about their bodies and how they look. As both sexes age, we gain weight and fat. Some of this weight and fat can be reduced through dieting and exercise, but some is stubborn and simply won’t go away on its own.

However, there is hope. CoolSculpting for men is an easy way to make these changes. Although it doesn’t quite work overnight, after a CoolSculpting regimen, patients report an average fat loss of 22 to 25 percent. That’s something anyone will get excited about.

Men tend to show their fat gain and retention in their torsos. Many men lack self-confidence due to a tummy roll, love handles, or man boobs. These features can make them hesitant to remove their shirts at the gym or at the beach.

Some men feel apprehensive about wearing form-fitting clothing because they wish to hide these features from the world. In an effort to hide their weight gain and fat, they may begin dressing in a manner that makes them look like a slob. This will hurt their confidence even further and will hold them back in many areas of life.

CoolSculpting for men can help men move beyond these feelings and can make them feel confident again. Whether the weight gain is from overeating, heredity, or lack of exercise, CoolSculpting can help make changes. After CoolSculpting a male chest,  a man can again look like the handsome and fit man he knows he is inside.

Seven Benefits of CoolSculpting for Men

There are a wide variety of benefits to CoolSculpting. Once people learn about this procedure, they can’t believe they waited so long to make a change. Read on to learn all about CoolSculpting and why it’s perfect for so many men today.

Many men shy away from plastic surgery because they simply don’t want to have surgery. CoolSculpting is not surgery and it can be administered on an out-patient basis. Treatments are entirely external, and no medications or anesthesia are needed.

Twenty percent of Americans are afraid of shots or needles to some degree. Ten percent are so afraid of needles that they qualify as having trypanophobia. This can make some medical treatment quite difficult for most men. CoolSculpting is needle-free, so that’s one less thing that male patients need to worry about.

The Food and Drug Administration (FDA) cleared CoolSculpting and declared it safe for human use. Further, a wide variety of research has been done on CoolSculpting. Many positive peer-reviewed clinical papers have been written and published on this fat-reduction method.

It comes with no downtime.

While surgeries require time off from work and rest at home, CoolSculpting does not. A male patient can get a CoolSculpting treatment in the morning or afternoon, and then go on with his day. No time away from work, family, friends or fun is necessary. That’s not true of other fat-reduction procedures.

CoolSculpting man boobs is a very targeted treatment. It can attack and remove fat cells in very specific areas, thereby ensuring the results patients want most.

It keeps working after you leave the office.

One of the most amazing things about CoolSculpting technology is that the procedure continues to work even after a patient has left the office. For three to four months after a CoolSculpting gynecomastia treatment, the patient’s body will continue to absorb and eliminate fat cells. This will lead to ongoing results that improve the male chest gradually over time.

Better yet – it’s permanent. Coolsculpting gynecomastia kills fat cells for good, and the fat cells that are killed and absorbed will not come back. You can regain weight if you continue eating unhealthy foods and don’t exercise, but the fat cells removed during your CoolSculpting treatment are gone forever.

It can help men regain self-confidence.

Men that suffer from gynecomastia or who have many stubborn fat cells on their body often experience low levels of self-esteem. Getting rid of this extra baggage once and for all can be life-changing and can help to restore confidence overall.

How CoolSculpting for Men Works and What to Expect

CoolSculpting is quick and easy. Most men seek CoolSculpting male chest area, the love handles, or the abdomen. When a male patient first meets with our CoolSculpting practitioner they will map out the areas where the patient wants the treatment.

Again, no shots, medications or anesthesia are necessary before or after a CoolSculpting treatment. A gel sheet will be placed over the area to be treated.

The patient will lie still while the practitioner uses a vacuum device to pull the fat towards the skin. Then, he or she will use the device to freeze the fat cells below the skin and eliminate them. There may be slight discomfort at first, but after just a few minutes it will subside and the patient will be able to relax in out Studio City medical spa while being entertained for the remainder of the procedure.

The entire process takes between a half hour and an hour and then it is complete. After the device is removed, the practitioner will massage the treated area to stimulate blood flow. Soon, feeling will return to the area.

Some patients see incredible results in just a few weeks. Others don’t see anything right away, but as time passes, the fat cells begin to die and become absorbed into the body. By the end of three or four months, the final and amazing results are clear.

Although many CoolSculpting man patients are happy with their results after just one or two treatment, others return for further treatments in the future. The fat cells that were killed in the process are gone forever, but a patient may want to apply CoolSculpting technology to other areas, or go deeper on the area treated at first. 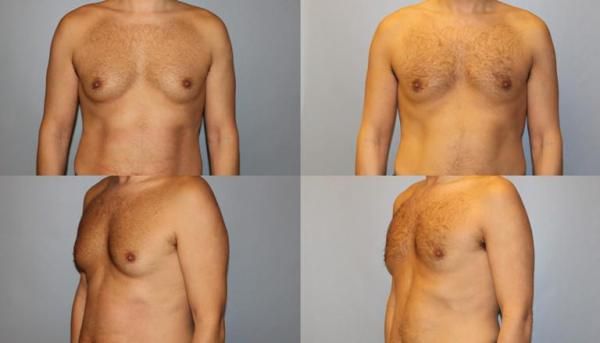 Gynecomastia and CoolSculpting in Men

Gynecomastia is one of the main torso issues for which men seek CoolSculpting chest treatment. This issue is not uncommon, nor is it a major health problem. However, the appearance of what some call “man boobs” due to hormonal imbalances can be devastating to any man’s confidence.

This condition is simply the swelling of breast tissue in boys or men and is caused by increased estrogen and decreased testosterone. Sometimes, it will affect one breast more than the other. At least 30% of men will be affected by gynecomastia in their lives.

Many of that 30% experienced gynecomastia during adolescence. Hormonal changes during puberty often cause this swelling. As the teen ages into adulthood, muscle develops and the gynecomastia disappears.

However, gynecomastia can reappear later in life due to a number of potential causes.

Gynecomastia usually occurs due to natural problems with hormone balance. Hormone imbalance usually occurs in adolescence and it also naturally appears in old age. Sometimes, for other health reasons, it can happen at any age in between.

However, gynecomastia also can be the result of drug and alcohol use, hyperthyroidism, kidney failure, malnutrition, liver failure or other problems. Certain medications can cause it, too. It’s important for men to see their doctor to determine the cause of their swollen breasts before attempting CoolSculpting gynecomastia.

Regardless of the cause, many men who show signs of gynecomastia in adulthood will benefit from CoolSculpting on the chest.

What Are the Negative Effects of Gynecomastia?

When gynecomastia is not the result of health conditions above but is rather due to common, otherwise harmless hormonal changes, it is not detrimental to a man’s physical health.

However, gynecomastia can be very damaging to a man’s self-esteem. Studies have shown that gynecomastia can lead to depression and anxiety. It can also lead to overall body dissatisfaction and eating disorders in extreme cases.

Due to low self-esteem, some men who suffer from gynecomastia report sexual dysfunction as well.

How Can CoolSculpting Help Men with Gynecomastia?

CoolSculpting gynecomastia can be very effective in the male chest area and can change this condition.

Once a male patient meets with our practitioner, they can work together to determine the best course of action. Many men will be relieved when they learn that CoolSculpting the male chest can help to rid them of dreaded man boobs once and for all. Coolsculpting man boobs can be very effective and can help a man to feel good about himself again.

It used to be that when someone gained a lot of fat in older age or suffered from a condition like gynecomastia, he just had to live with it. That is not the case any longer. CoolSculpting for men is quick, easy, affordable and life-changing.

There is no reason to wait or to be unhappy any longer. Our practitioner is waiting to meet with you to discuss your treatment options and to answer any questions you may have. Don’t delay. Contact our office today and return to being the man on the outside that you know you are on the inside.