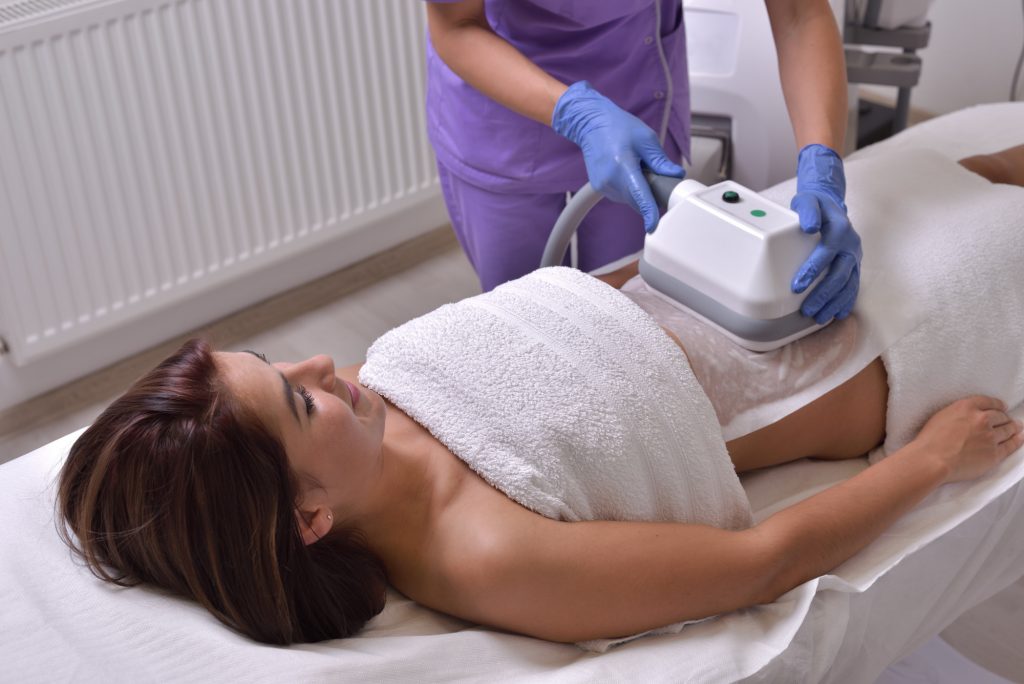 DO YOU KNOW THE DIFFERENCE BETWEEN SCULPSURE VS. COOLSCULPTING? HERE’S HOW EACH PROCEDURE TACKLES STUBBORN FAT AND TRANSFORMS YOUR BODY.

A doctor’s prescription for weight loss is often a healthy diet and exercise. However, for some, it’s not quite that simple. There are many factors that influence weight loss. And for those trying to reduce fat for an event, there simply may not be enough time.

While fat reduction technology isn’t a substitute for a healthy diet and exercise routine, body contouring treatments are a non-invasive, non-surgical option.

However, navigating the body contouring market can be difficult. There are a few options available, SculpSure and CoolSculpting being some of the most popular. But, not every body contouring technology is created equal.

In this comprehensive article, we’ll go in-depth on SculpSure vs. CoolSculpting, the benefits, and how to find out if these treatments are right for you.

Is Body Contouring Right for You?

Not everyone is a candidate for Los Angeles body sculpting, in fact, there are some situations that will contraindicate you.

Although fat reduction technology can help you rid your body of unwanted fat, it’s not a substitute for weight loss. The main premise behind body contouring is removing stubborn fat that doesn’t seem to budge with dietary and exercise interventions.

Losing weight to achieve a healthy BMI can only be accomplished through a healthy diet and exercise routine.

However, patients do report a reduced fat gain in CoolSculpting treatment areas even after gaining weight.

As a precaution, people suffering from obesity are not recommended to receive CoolSculpting.

SculpSure vs. CoolSculpting: The Main Difference

The main difference between SculpSure vs. CoolSculpting is the temperature.

These lasers work by heating the fat cells below the skin and destroying their integrity. Over the course of time following the treatment, the body removes the fat cells.

Both treatments are effective in reducing stubborn fat cells.

Which One Is Better?

SculpSure and CoolSculpting are both very similar in their efficacy. However, CoolSculpting does have a slight advantage over SculpSure.

Let’s get into the details of SculpSure vs. CoolSculpting:

Both procedures are FDA-approved, meaning they are relatively safe when used correctly. As with any procedure, make sure you are aware of any contraindicating conditions.

While laser lipolysis (SculpSure) and cryolipolysis (CoolSculpting) seem to be similarly effective, CoolSculpting seems to have more clinical data to support it.

With over seven million performed procedures, CoolSculpting is one of the most prevalent non-invasive fat reduction procedures.

Additionally, in one comprehensive scientific review, researchers state: “At seventy-three percent, the patient satisfaction rate is higher than with other technologies used for noninvasive lipolysis.”

Not surprisingly, a 2009 UCLA study found an eighty percent decrease in thickness of the top fat layer following a CoolSculpting technology treatment.

However, both technologies are able to kill and permanently remove fat cells from the body. Long term results are similar, but CoolSculpting seemingly has higher client satisfaction. Although, CoolSculpting’s noticeable results take a little longer than SculpSure’s to show up.

On average, research shows that the average fat reduction results measure in at about two centimeters. However, results will vary depending on the individual.

Both treatments allow you to be seated or lying during your treatment, providing a relaxing and comfortable treatment experience.

Application methods for both CoolSculpting and SculpSure are very similar appearance-wise.

CoolSculpting uses a vacuum combined with a cooling panel to freeze fat cells, whereas SculpSure uses a four-paneled laser directly on the skin.

When it comes to SculpSure vs. CoolSculpting, the downtime and recovery are almost identical.

CoolSculpting requires no downtime for recovery. The most frequently reported side effect following the treatment is numbness. However, with new CoolSculpting technology, there are fewer incidences.

In fact, recovery from CoolSculpting is so easy that you can even have an invasive procedure like liposuction following treatment!

Because both treatments require little to no downtime, there is no advantage in either court. Neither treatment requires anesthesia or medication.

Based on a review of the scientific literature, only 850 adverse effects had been reported out of 850,000 CoolSculpting treatments at the time of publication. This means the treatment has a 0.001% adverse event rate.

The most frequently reported side effects following the treatment are bruising and numbness.

In a 2016 scientific review, researchers stated that more evidence was needed to support the safety and effectiveness of laser fat reduction technology like SculpSure.

Because neither treatment is surgical or invasive, there is no scarring following each treatment.

CoolSculpting charges by the handpiece needed, whereas SculpSure charges by the laser panel. The amount needed will depend on the size and how many of the areas need to be treated.

Thankfully, CoolSculpting and SculpSure both charge by the area as opposed to the session. This means you can space out sessions for convenience in any way you’d like.

Other factors that will impact the cost are where you live and the provider you select.

SculpSure vs. CoolSculpting treatment times both vary. Durations range from thirty-five minutes to an hour. The exact time needed for each treatment will depend on how large of an area you are treating.

Choosing the right treatment for you will also depend on your physiology.

CoolSculpting’s rounded devices are best suited to those who have rolls of fat as opposed to one thin layer.

SculpSure produces better results on those with evenly distributed fat. This allows the laser to penetrate evenly on the skin. Research supports this, with one review stating that: “The ideal candidate for laser lipolysis is a patient who is thin, in good health, and presents with isolated pockets of removable fat.”

CoolSculpting and SculpSure can both be used in various treatment areas. Some of the most popular areas include the lower stomach, thighs, double chin, arms, and more.

Advances in technology mean neither procedure requires numbing for a comfortable experience.

SculpSure’s laser panels have a cooling feature to accommodate for excess heat. The most common sensation is a slight tingling.

Pinching, tingling, pulling, and tugging are commonly reported sensations felt during CoolSculpting. This slight discomfort will only last for an estimate of ten minutes. Sensors also help to regulate the temperature to ensure the treatment is comfortable.

Body contouring treatments are considered an aesthetic cosmetic procedure. While every insurance company is different, services like CoolSculpting and SculpSure are not usually covered under insurance.

Both CoolSculpting and SculpSure have positive reviews that suggest the treatments are effective for most people. As with any treatment, the experience and results are dependent on the patient’s unique physiology.

As a top-rated medical spa, we are happy to offer our clients the gold standard CoolSculpting experience by our expert practitioners.

Booking an appointment with us means you’ll receive a personalized consultation to make sure you’re getting the best treatment for your body. Your preferred treatment areas will be mapped and a gel sheet will be placed.

A vacuum handpiece will then be placed over the gel sheet to draw unwanted fat away from the body. Then, the cooling panel will freeze the fat cells under the skin, killing them. During the treatment, you can use your phone or relax.

When completed, your practitioner will massage the area to restore normal blood flow.

SculpSure Vs. CoolSculpting: The Verdict

Overall, both body contouring treatments are very similar. However, CoolSculpting is more prevalent and seems to have more clinical data to back its effectiveness and patient satisfaction. CoolSculpting also boasts over seven million treatments performed thus far.

As with any treatment, it’s important to be aware of any underlying conditions prior to booking an appointment. Although body contouring treatments are very safe, there are some conditions that can contraindicate a session.

If you live in the Los Angeles area and you’re interested in removing your stubborn fat, Schedule your CoolSculpting consultation in Los Angeles today with our qualified healthcare professionals..